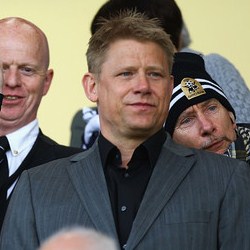 The former Juventus and Fulham shot stopper is expected to hang up his gloves at the end of this season and return home to Holland.

Schmeichel said: “There are a lot of good keepers around who fit the style of United, but I would spend a lot of energy persuading Van Der Sar to stay for another season.”

“Lindegaard is an immensely talented keeper, we all know that, but not a lot of people know what he’s capable of because he’s 26 but not had a long career.

“Whatever he’s done in the game has all happened within the last six months. You can always play well for a short period of time, but can you play well for United for ten years? We don’t know so that will be exciting to follow.”