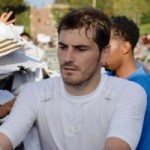 The Spanish international goalkeeper is frustrated after being dropped for the opening game of the season and is being linked with Premier League side Arsenal.

Former Real player and coach Schuster remarked: “I think Iker is the goalkeeper of Madrid and should be playing. I would understand if he wanted to leave in December.

“It’s very difficult for me to think and see Iker in a team other than the Real Madrid.”