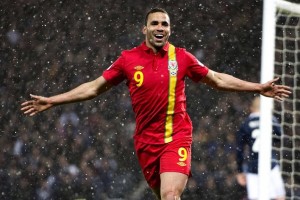 Two goals in little more than a minute condemned Gordon Strachan to defeat in his first competitive game in charge of Scotland and left the national team anchored to the bottom of Group A.

A reckless challenge by Robert Snodgrass, who had already been booked, saw the midfielder dismissed and allowed Aaron Ramsey to equalise from the penalty spot in the 71st minute.

Ninety seconds later an unmarked Hal Robson-Kanu headed past Allan McGregor from six yards as the Welsh staged a repeat of their comeback in Cardiff.

It had all looked so different for Scotland when they opened the scoring with defender Grant Hanley’s goal in first-half stoppage time, having weathered an early Welsh onslaught in the snow at Hampden.

The result lifts Wales into third place in the group, though their chances of qualifying are remote with Belgium and Croatia both seven points ahead. Shame On Arsenal Fans Who Turn On Wenger – Alan Shearer