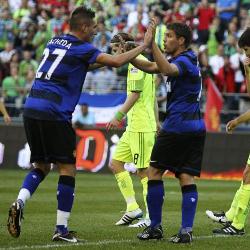 Wayne Rooney came off the bench to score a hat-trick as Manchester United put in a merciless second half display to thrash MLS side Seattle Sounders 7-0 in the latest match of their pre-season tour of North America.

Rooney was introduced at half-time and he wasted no time in making his mark on the game, adding to Michael Owen’s first half opener with three strikes in 21 minutes to put the Premier League champions side six up.

Mame Biram Diouf and Park Ji-sung were also on target in the second half and when Gabriel Obertan added a seventh late on, United took their goal tally to 11 in two games, having beaten New England Revolution 4-1 in their opening preparatory game for the new season.