Reports are out claiming that Sunderland midfielder Sebastian Larsson insists Manchester United have lost their fear factor at home. 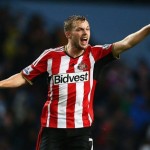 The Swedish international hit the winner at United last season.

He told The Journal: “We managed to beat them once and we kind of beat them the other time too!

I would say the league win was more important – but then I did not play in the cup win!

“They were two big games. Getting into the cup final was massive for the fans and for us players but the win in the league was in the middle of that crazy run we had which secured our Premier League status. We will use those memories and we know we have beaten them before.

“There is no reason why we can’t do it again.

“On the other side, unless you perform to your best then you are going to have a very tough afternoon.” Nicolas Otamendi To Turn Down Manchester United For Valencia Stay

Jordan Henderson : It Was Difficult To Leave Sunderland