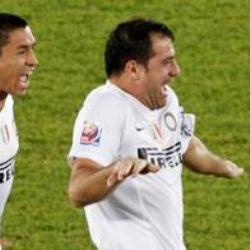 Internazionale will play TP Mazembe of DR Congo in the final of the Club World Cup after the Italians eased to a 3-0 win over Seongnam Ilhwa Chunma.

Goals from Dejan Stankovic, Javier Zanetti and Diego Milito helped Rafael Benitez’s side to victory against a Korean side who had their chances but were found wanting with the finish.

Milito has had a difficult season with form and injury after firing Inter to Champions League victory last season.

But he was in fine form at Zayed Sports City, rounding off the scoring with a poacher’s finish and setting up both other goals.

Inter Milan Counting On The Experience Of Claudio Ranieri