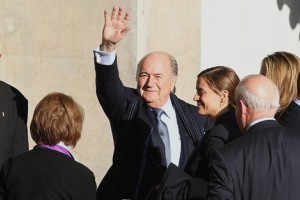 Sensational news are out and it has been reported that FIFA president Sepp Blatter has apologised to England and Mexico and confirmed that the use of goal-line technology is back on the agenda.

Sepp Blatter told a media briefing in Johannesburg : “I have spoken to the two federations directly concerned by referees mistakes. I have expressed to them apologies and I understand they are not happy and that people are criticising,”

Blatter also added that : “It is obvious that after the experience so far in this World Cup it would be a nonsense to not reopen the file of technology at the business meeting of the International FA Board in July.

“Personally I deplore it when you see evident referee mistakes but it’s not the end of a competition or the end of football, this can happen.

“We will naturally take on board the discussion on technology and have first opportunity in July at the business meeting of the International FA Board.”

Blatter also said that :”I apologised to England and Mexico. The English said ‘thank you and accepted that you can win (some) and you lose (some), and the Mexicans bowed their head and accepted it.”

The FIFA president then added that the IFAB would only look again at goal-line technology and not video replays referring to Carlos Tevez’s goal against Mexico.

“The only principle we are going to bring back for discussion is goal-line technology, ” he said.

“Football is a game that never stops and the moment there was a discussion if the ball was in or out, or there was a goal-scoring opportunity, do we give a possibility to a team to call for replays once or twice like in tennis?

“For situations like the Mexico game you don’t need technology.”

Blatter added that FIFA will launch a new initiative to improve refereeing standards later this year.

“We will come out with a new model in November on how to improve high level referees,” he added. “We will start with a new concept of how to improve match control. I cannot disclose more of what we are doing but something has to be changed.”

James : Wayne Rooney Was Marked Out Of The World Cup!