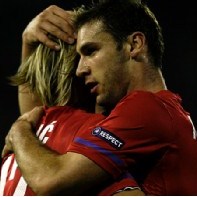 Italy held Serbia to a draw in Belgrade to remain unbeaten in qualifying and dent their rival’s hopes of playing at Euro 2012.

Needing a win to earn a spot in the play-offs, the hosts got off to the worst possible start as Claudio Marchisio put Italy ahead after 56 seconds.

Chelsea defender Branislav Ivanovic equalised in the 26th minute Serbia had several chances to go in front, but were denied by good saves from Gianluigi Buffon.

The result at the Crvena Zvezda Stadium, coupled with Estonia’s 2-1 win over Northern Ireland in the other Group C game, dropped Serbia to third, one point behind Estonia who have played all their games.

Serbia must now win their final qualifier at Slovenia on October 11 to reach the play-offs.