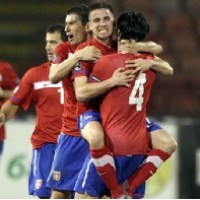 Northern Ireland’s Euro 2012 qualification hopes took a heavy blow in Belgrade as they conceded twice in the second half to surrender a hard-earned lead against Group C rivals Serbia.

Only some brave last-ditch defending stopped them going behind but when Gareth McAuley rose to head home Chris Brunt’s cross in the 40th minute, a famous victory looked on the cards.

But Serbia, playing in the near-deserted Crvena Zvezda Stadium as a result of crowd trouble against Italy, hit back through Marko Pantelic before Zoran Tosic drilled in the winner via a slight deflection.