Reports are out claiming that Arsenal winger Serge Gnabry is delighted with his breakthrough Premier League campaign. 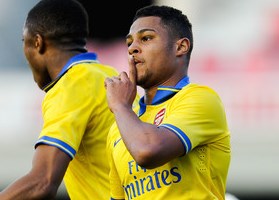 The young German is starring alongside top Emirates stars, making 14 appearances this season and scoring his first goal at Swansea.

Gnabry said: “I am very happy with how this season has gone.

“I am a very young player, so to be alongside all these top players, in a squad with massive potential, has been really good. I have been involved in most of the games so I am very happy.

“[My life] has changed a lot. Obviously you get more attention from fans and get recognised more often.

“Also, as a player you feel confident when you are in and around a team of top players.

“I’m just trying to get to the next level now.”