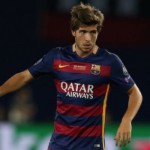 Barca and Arsenal are battling for Nolito ahead of the winter market.

Roberto said: “I would be delighted if Nolito returned.

“We played together in the same youth team. A lot of time has passed and he has improved a lot.”