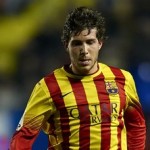 Reports are out claiming that Barcelona midfielder Sergi Roberto is confident Lionel Messi will return to his best this season.

The 22 year old insists past criticism of the Argentine is “unfair”, including for the World Cup.

“He’s the best in the world and the reviews are unfair. He won the trophy for best player deservedly so.

“He lost the World Cup final, but he was very good,” said Roberto. Dad : No Proposal From AC Milan For Thiago Alcantara