The Daily Mail has reported that Sergio Aguero has been granted time off by Manchester City boss Pep Guardiola. 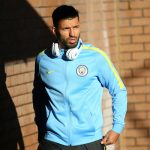 The Argentine international striker is suspended until December 31 for a crude tackle on Chelsea defender David Luiz last weekend.

Aguero was suspended for the weekend’s 4-2 loss to Leicester City and still has another three matches to serve on the four-match ban he received from the FA for violent conduct.

Fixtures against Watford, Arsenal and Hull City will also be missed by Aguero who will be back available for the New Year’s Eve meeting with Liverpool at Anfield.

In a bid to freshen the 28-year-old, Guardiola will allow him some time away from the club during his enforced break.

Aguero is expected to return to City training at the end of this week. Santos To Lodge Formal Complaint Against Chelsea Over Neymar Pursuit