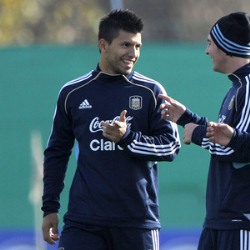 Sensational news are out and it has been revealed that Sergio Aguero is set to finalise a £38 million deal with Premier League side Manchester City .

Reports have surfaced that, an impasse in the potential deal was broken when City’s Abu Dhabian owner Khaldoon al-Mubarak became personally involved in negotiations with Atletico Madrid.

Tevez is for sale at £40 million, which would mean that Aguero, believed to be expecting less expensive but hardly low wages, will likely replace his Argentine compatriot if a buyer can be found for last season’s captain.

City’s previous record signing was Brazilian Robinho, for whom £32 million was paid for a player who never settled at Eastlands. Aguero’s pricetag would make him the second-most expensive signing in Premier League history after Fernando Torres’ £50 million January move to Chelsea, the club Aguero was once heavily linked to.

Their previous deals this summer saw them land Gael Clichy from Arsenal and Stefan Savic from Partizan Belgrade to replenish a squad already brimming with expensive talent.