Reports are out claiming that Sergio Aguero has denied suggestions that he and Mancheste City boss Pep Guardiola had a falling out recently. 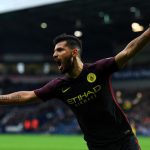 Aguero was left out of City’s starting XI for matches against Barcelona and Everton with some reports indicating that he and Guardiola were not seeing eye to eye.

However, the 28-year-old has revealed that he was not mentally right to start those games having copped a barrage of criticism after missing a penalty for Argentina against Paraguay in their 1-0 World Cup qualifying defeat.

Former Atletico Madrid star Aguero also rubbished speculation that he could soon join Real Madrid by making it clear he will stay at City until his current contract expires before returning to boyhood club Independiente.

“I never had problems with Guardiola, nor him with me. He always helped me and gave me advice,” he told South America’s ESPN Radio.

“After the game with Paraguay, I was emotionally very bad. Guardiola helped me a lot, he told me to try not to pay so much attention to what is said. He makes me focus on winning.

“For now I’m fine at Manchester City, and the day I leave it will be to return to Independiente. How long has it been rumoured about Real Madrid? I’m very happy at City and more so now with Pep.

“This month I’ve been thinking very positively. In the last few weeks my head has changed a lot.”