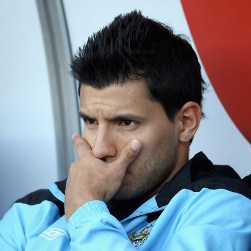 It has been revealed that Manchester City striker Sergio Aguero is set to miss the Premier League clash with Sunderland.

City thought the Argentine international would be fine but he was unable to train this week.

It is a major blow for City boss Roberto Mancini with his side now three points behind Manchester United at the top.

Now he is ready to turn to Carlos Tevez to help revive their title challenge.