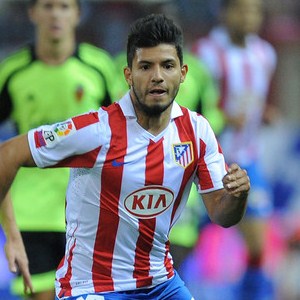 Great news for all Atletico Madrid fans as striker Sergio Aguero has put pen to paper on a new deal.

The Argentine international striker has reportedly agreed to a two-year contract extension to keep him at the Vicente Calderon until summer 2014.

“Atletico Madrid confirm the renewal of striker Sergio Aguero’s deal. The Argentinian commits until 2014,” a statement on the club’s website, clubatleticodemadrid.com read.

The player told sergioaguero.com: “I want to say I am very happy to have renewed with Atletico Madrid.

“It is not only about putting a signature on a contract, it is also renewing my commitment to the club I joined when I was 18 and where I have been for almost five years. It has also renewed my desire to keep progressing with the club.”

Atletico, who lie sixth in La Liga, started 2011 with a goalless draw at home to Racing Santander yesterday.

Real Madrid Ready To Bring Samuel Eto’o Back To Spain