Barcelona midfielder Sergio Busquets is of the belief that the club never wanted to offload Yaya Toure. 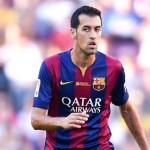 The Catalan giants sold the Ivory Coast midfielder to Manchester City for around £24million in July 2010 but it was not that they wanted to sell him according to Busquets who stepped into the role vacated by his old colleague.

Ahead of Tuesday’s UEFA Champions League Round of 16 first leg at the Etihad stadium, Spain international Busquets spoke of Toure’s exit a little over four years ago saying that the 31-year old ‘chose his destiny’.

“People were surprised because Toure was one of our best players, but I knew what was going through his mind,” Busquets told The Guardian.

“Ultimately, players choose their destiny and he chose to leave. He could have stayed, but I’m sure City told him he’d play more and earn more; it wasn’t that Barcelona wanted to sell.”

Since his departure from Camp Nou, Toure has won two Premier League titles with City as well as the 2011 FA Cup and last season’s Capital One Cup. He is suspended for the Round of 16 first leg this week.