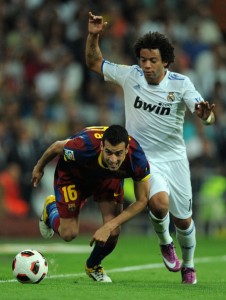 Sergio Busquets denied Thiago Motta a place in the final of the Champions League last season and now it is likely that he has shot himself in the foot after Uefa confirmed they have opened a disciplinary case against him following the Champions League semi-finals against Real Madrid in which he is alleged to have racially abused Marcelo.

Madrid complained that Busquets had allegedly called the left-back a “mono” (monkey) during the semi-final first-leg on April 27 which ended 2-0 to the Spanish champions.

A statement realeased by Uefa reads:

“Uefa has opened disciplinary proceedings against FC Barcelona midfielder Sergio Busquets, who is alleged to have violated Article 11 bis of the Uefa Disciplinary Regulations by directing racist abuse towards a Real Madrid CF player in the Uefa Champions League semi-final first-leg between the clubs on April 27.

“The proceedings have been launched on the basis of evidence provided by Real Madrid . The Uefa Control and Disciplinary Body will deal with the case on Sunday, May 15 and the decision will be communicated to the club on Monday, May 16.”