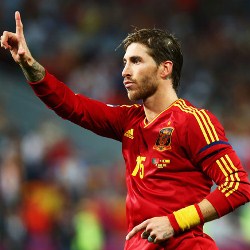 The Real Madrid defender coolly chipped the ball past Portugal goalkeeper Rui Patricio to help Spain extend their lead in the shoot-out and eventually win the match 4-2 on penalties.

Italy’s Andrea Pirlo also scored a similar penalty kick during the shoot-out against England but many would say that Sergio Ramos’ penalty kick was much more impressive.

What do you think? Who scored the better penalty kick?