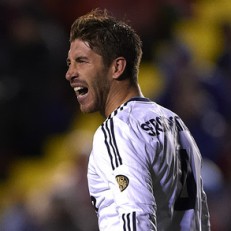 Sergio Ramos has declared that Real Madrid must “keep fighting” after falling 13 points behind leaders Barcelona.

Boss Jose Mourinho also insists that he had no intention of quitting and did not fear for his job, and Ramos has demanded the team keep on fighting.

Ramos said on the Madrid website : “Once again we have dropped important points, despite the team playing well in the first half, in which we had chances to score but we didn’t have any luck,”.

“We shouldn’t think about the league leaders or anybody else. We should only think about ourselves.

“We must be self-critical and La Liga is now very difficult, practically impossible, but we need to keep on fighting.

“When we lose many conclusions are drawn, but it is when we must use our heads the most.”