It has been reported that New Manchester United goalkeeper Sergio Romero admits playing for Louis van Gaal again helped convince him about the move.

The Argentine international goalkeeper signed for United yesterday and says the chance to play for his former AZ Alkmaar coach had a big influennce. 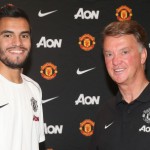 “He is a great manager. He’s the kind of boss who puts you at ease and from the first moment that I was given the goalkeeper shirt by him in 2007, he told me that I would play an important part in his squad.

“It was a vital period for me because from the moment I signed for him, my career started to really take off. He is someone who has been very important in my life. He helped me a lot when I arrived in Holland as I didn’t speak Dutch and I didn’t speak English but he spoke Spanish.

“He is very honest and open as a person, he helps and reassures you and he cares about every player and every member of staff.”

The former Sampdoria and AS Monaco keeper is thrilled with the opportunity.

“Absolutely. From the very first moment that I heard there was a possibility of joining this club, I have been thinking constantly about lots of things: playing for the club, training with the other players, getting to know my teammates and winning silverware for United.”

Romero also told manutd.com: “It’s a really strong squad. A team like United with these really great players will always compete strongly in every competition that we enter. The club showed last season that it is getting stronger and it will continue to do that. If we can put all of the manager’s instructions and thoughts into action we can achieve a lot.”