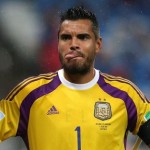 It has been reported that Sampdoria goalkeeper Sergio Romero denies he turned down Manchester United on deadline day.

The Argentine international was linked with United and Manchester City on Monday.

But he insists: “I’ve had two or three possibilities but none of them were positively concluded.

“I’ve not asked more money to go to Benfica and I’ve read I would have refused United. But in your opinion, there is someone able to refuse one of the world’s top club ?”