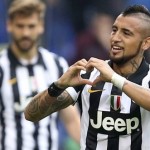 Juventus won a fourth successive Serie A crown, and their first under coach Massimiliano Allegri, by beating Sampdoria 1-0.

Arturo Vidal headed the only goal of the game from Stephan Lichtsteiner’s cross in the 32nd minute.

It is Juve’s 31st league title triumph, making them Italy’s most successful domestic team by far.