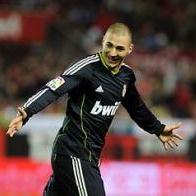 Real Madrid emerged with a slender advantage from a fiery and controversial Copa del Rey clash at holders Sevilla on Wednesday when Karim Benzema struck to give them a 1-0 victory in their semi-final first leg.

Sevilla had a goal controversially disallowed in a match littered with yellow cards at a rowdy Sanchez Pizjuan stadium.

As tempers frayed after the final whistle, Real goalkeeper Iker Casillas appeared to be struck on the back of the head by a missile thrown from the crowd but was not seriously hurt.

Benzema, who scored only his second league goal for Real last Sunday, put them ahead in the 17th minute when he exchanged passes with Mesut Ozil, drove into the penalty area and beat two defenders before firing a low shot past goalkeeper Andres Palop.