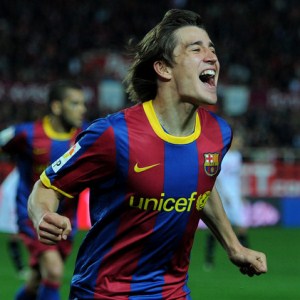 Lionel Messi was at the centre of a huge injury scare as Barcelona were held to a 1-1 draw by a spirited Sevilla side in a pulsating La Liga contest.

Bojan Krikic saw his 30th minute opener for Barca cancelled out by a Jesus Navas header at the Estadio Ramón Sánchez Pizjuan, but the match will be recalled as much for the sight of Messi lying on the ground for several minutes after the half-time whistle sounded.

The FIFA world player of the year appeared to suffer a blow to a knee in going for a loose ball with Sevilla keeper Javi Varas. He required treatment before hobbling off the park with the help of several of Barca’s backroom staff.

He reappeared for the second period, but found his movement restricted as Sevilla recovered in some style to earn a deserved draw from a terrific encounter that saw both teams give their lot for the three points.

Barca’s failure to win sees their lead over Real Madird cut to five points after Jose Mourinho’s side enjoyed a 2-0 victory over Hercules at the Bernabeu on Saturday.