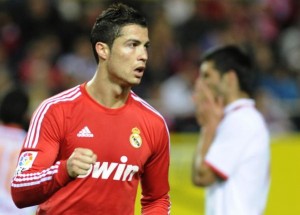 Cristiano Ronaldo smashed a hat-trick as 10-man Real Madrid crushed Sevilla 6-2 on Saturday to storm back to the top of La Liga and a three-point lead over bitter rivals Barcelona.

Jose Callejon, Angel Di Maria and Haltin Altintop were also on target in a match where Jose Mourinho’s team was reduced to 10 men just before half-time when defender Pepe was red-carded.

Jesus Navas and Alvaro Negredo grabbed consolations for Sevilla while Madrid were also indebted to goalkeeper Iker Casillas for a wonder save when the advantage was only one goal.

Real are now guaranteed to end 2011 on top with Barcelona playing Brazilian side Santos on Sunday in Japan in the final of the Club World Cup.