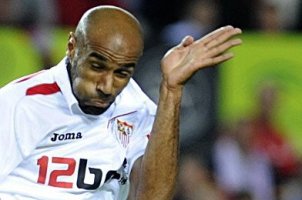 Substitute Frederic Kanoute headed the winner for Sevilla who overcame a resurgent Villarreal 3-2 to keep themselves in touch with Barcelona at the top of the Spanish league on Sunday.

Villarreal proved tough competition though and responded to Luis Fabiano’s opener after nine minutes with goals from Robert Pires and David Fuster.

Fabiano equalised almost immediately and then Kanoute, still not fully fit and starting the game on the bench, scored a crucial winner to maintain the four-point distance from the champions.

Sevilla coach Manolo Jimenez felt his team was not as sharp as they should have been after playing in the Champions League in midweek.