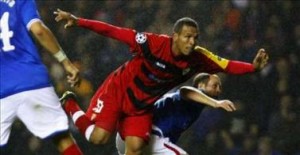 Sevilla made it two wins from two in Champions League group G as they beat Rangers 4-1 at Ibrox Park.

Though Rangers more than held their own in a fiercely-contested, high-tempo first half, the Spaniards turned on the style in the second half to sweep their opponents away with goals from Abdoulay Zonko, Adriano, Luis Fabiano and Fredi Kanoute.

Nacho Novo’s 88th-minute piledriver was a shot to savour, but little consolation for the hosts.