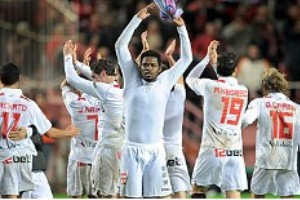 Holders Barcelona were knocked out of the King’s Cup on Wednesday when they won a thrilling last-16 second-leg clash at Sevilla 1-0 but were eliminated on the away goals rule after the tie ended 2-2 on aggregate.

The Andalusians beat Barca 2-1 at the Nou Camp in the first leg and goalkeeper and captain Andres Palop was the hero in the return, producing a string of superb saves to deny Pep Guardiola and his players a repeat of their 2009 triumph.

Barca can no longer match last year’s feat of winning an unprecedented six titles and it was the first time they have been eliminated from a competition since April 2008 when they lost to Manchester United in the Champions League semis.