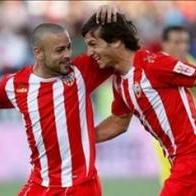 Almeria stunned Sevilla with a 3-1 victory in their La Liga clash at the Estadio Sanchez Pizjuan with Pablo Piatti’s brace lifting the visitors out of the relegation zone.

Frederic Kanoute missed a first-half penalty, before Fabian Vargas finally opened the scoring three minutes after the restart, and Pablo Piatti looked to have sealed the win as he added a second in the 81st minute.

Kanoute pulled one back two minutes later to give the hosts fleeting hope, but Alexis was shown a second yellow card late on, before Piatti doubled his tally with a stoppage-time strike to wrap up the victory for Almeria.