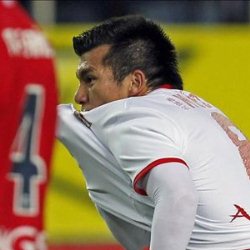 Sevilla claimed their first league win of 2012 in new coach Michel’s home debut after defeating Osasuna 2-0 in a hard-fought encounter at the Ramon Sanchez Pizjuan Stadium.

Michel saw his side slump to a 2-0 defeat to Real Sociedad on Monday in his first game since replacing Marcelino Garcia Toral, but it was a happier night for the former Getafe boss this evening thanks to goals from Gary Medel and Piotr Trochowski.

Medel opened the scoring in the 16th minute and substitute Trochowski added a second deep into injury time as Sevilla earned their first league win since December 5, having picked up just two points from eight games since then.