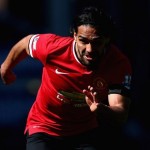 Reports are out claiming that Sevilla are believed to be eyeing Manchester United flop Radamel Falcao.

El Gol Digital reports that the Spanish side are showing interest in Colombian striker Falcao who is on loan at Manchester United from Monaco.

It is suggested that Falcao is seen as a possible replacement for Carlos Bacca who is being linked with a summer move away from the Ramon Sanchez Pizjuan.

28-year old Bacca, who has 25 goals for Sevilla in all competitions this season, is a target for Liverpool and Tottenham and could quite possibly be replaced by countryman Falcao if he happens to depart at the end of the season.