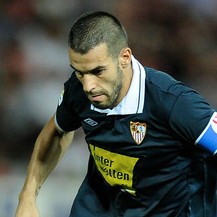 Reports are out claiming that Chelsea are considering a bid for Sevilla striker Alvaro Negredo.

The Daily Mail reported that the Spanish international striker has been offered to Chelsea as they begin the search for another striker to provide support Fernando Torres.

The Sevilla forward is being hawked around Europe for £16million, but is just one of a number of names on Rafa Benitez’s wish-list.

The interim Chelsea coach has been assured by technical director Michael Emenalo that reinforcements will be brought in during the January window.

Negredo was a target for Benitez when he was at Liverpool.

He has an impressive goalscoring record and has made an impact with Spain’s national team, and the valuation of the 27-year-old will not be a problem for a club of Chelsea’s resources. Michael Essien Out For Six Months With Knee Injury