Reports are out claiming that Hamburg midfielder Rafael van der Vaart is being linked with a return to Spain. 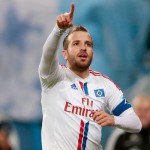 The former Real Madrid attacker comes off contract in June and Hamburger Abendblatt says he is warming to a return to the Spanish Liga.

The likes of Sevilla and Valencia have been mentioned as potential destinations for Van der Vaart.

He spent two years with Real before moving to England at Tottenham in 2010.