Reports are out claiming that Sevilla striker Fernando Llorente has hinted he had contact with Real Madrid over the summer. 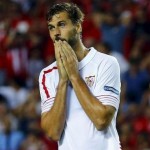 The Spanish international left Juventus for Sevilla, though was also linked with Real.

After being part of Sevilla’s 3-2 win over Real, Llorente was asked about the Real rumours.

“If something has come out in the press, then equally there must be something to it ….,” smiled Llorente.

“It will be very special. This season it seems I am always returning home. First, against Juve in the Champions League and now with Athletic Bilbao.”

Van Der Vaart : I Will Only Join Manchester United!