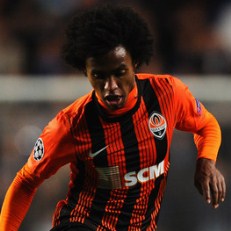 It has been reported that Shakhtar Donetsk coach Mircea Lucescu has slapped a €35 million price-tag on Willian.

However Lucescu warned: “There is a sale clause and that is €35 million.

“Chelsea paid €31 million this summer for Oscar. The difference between Oscar and Willian is that Willian is much more mature and has a lot of Champions League experience.

“The Blues wanted him this summer for €20 million, but we refused.”