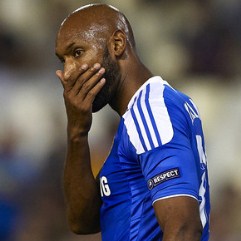 The former Arsenal and Real Madrid striker is being linked with a January move to China.

“It is so difficult. We actually asked about Anelka,” a Shanghai Shenhua official told newspaper DF Daily.

“We also know he could leave the Blues as a Bosman player next summer but there are so many clubs interested in him.

“AC Milan, Russian clubs and some Gulf clubs. If we want to sign him finally, [his contract] would cost plenty.”