It has been reported that Manchester United signings Luke Shaw and Ander Herrera are looking forward to their preseason tour of US. 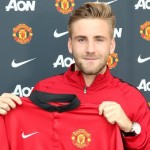 Shaw was recently in Miami for England’s World Cup warm-up match against Honduras and is looking forward to returning to the States with his new club.

“I really love America,” he enthused.

“When I was younger, I went to a tournament out there in Dallas. It’s a great country – with nice weather too!”

“I’m really excited to go with United to America,” he said.

“We will play some big games against Roma, Inter Milan and Real Madrid. It will be a dream for me to pull on the United shirt against them.”