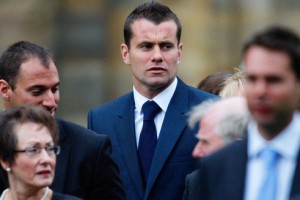 Manchester City goalkeeper Shay Given is holding strong hope that the side can clinch fourth spot from Tottenham in the run-in to the end of the season.

City took a while to warm up but finally overcame Wigan 3-0 on Monday night to go within two points of fourth-placed Spurs and Given is eyeing more wins to take that coveted European Champions League position from the north London club.

Given told reporters that : “We’ve got a lot of big games coming up and hopefully we can get across the line,”

He also said that : “It will be a tense finish and hopefully we can back tonight’s result up with three more points on Saturday at Burnley.”

Given also praised striker Carlos Tevez who effectively won the match off his own boot with a terrific hat-trick in the final 20 minutes of the contest.

Given added that : “It was a bit of a scrappy first half and the manager let us know at half-time he wasn’t happy – but we upped it a gear,” Macini inspired us with his RvP comments – Tevez

Joe Hart Only Wants To Play For Manchester City