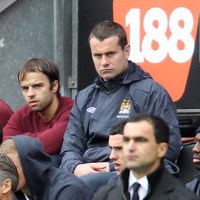 Manchester City goalkeeper Shay Given has declared that he would love to remain at the club.

The Republic of Ireland international fell behind Joe Hart at the start of the campaign before undergoing season-ending shoulder surgery and his Eastlands future has become clouded.

However 35-year old Given has admitted that he wants to remain with the Eastlands club and fight for his place in the first team.

The former Newcastle United told Radio Manchester : “It was important for me to be part of something big here,”.

“I don’t know what the future holds and whether I will be here or not.

“I would love to be part of it but time will tell.

“I don’t regret coming here. You get a gut feeling and I said when I joined this club I felt like a kid again.

“It was a new club and new surroundings, and maybe you do go a bit stale being at the same club for 12 years.”