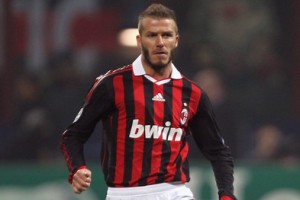 Teddy Sheringham has said that former Manchester United teammate David Beckham will go down as one of the game’s greats.

Beckham who turns 35 in May, returns to Manchester United tomorrow with current club AC Milan trailing the Premier League leaders 3-2 in the last 16 of the Champions League.

Sheringham, who hung up his boots when he was 42, told a local newspaper that : “As long as you are competing, you have that drive to want to carry on and perform at the top level.

He also stated that : “He obviously has the talent and plays a lovely game — he is a clever player and is very technical.

He also added that : “His game is not about running, so he will have chances to go on for longer.

Sheringham also added that : “It comes down to the desire to carry on putting your body through what you have to do to play a full season in competitive football.”