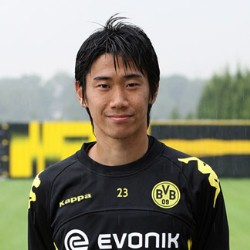 It has been revealed that Shinji Kagawa has opened talks over a new deal with Bundesliga champions Borussia Dortmund.

The Japanese international has emerged as a transfer target for Premier League champions Manchester United in recent weeks.

It is said that the Premier League giants have sent scouts to watch the 22 year old attacking midfielder on a number of occasions but the former Cerezo Osaka star is happy to stay in Germany.

“We have even had a first round of talks with Dortmund general manager Michael Zorc with regard to a new contract.”

“Shinji is actually contracted to Borussia Dortmund and he likes the club. He is absolutely looking forward to playing in front of the exciting Signal Iduna Park crowd in the Bundesliga and the UEFA Champions League in the new season.”

Kagawa scored eight goals in 17 games last term before a foot injury sustained at the Asian Cup in January saw him sidelined for almost the entire second half of the campaign.