It has been reported that Sebastian Kehl has welcomed Shinji Kagawa back to Borussia Dortmund. 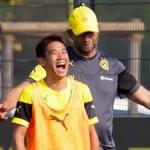 The Japanese international is said to be “hugely relieved” at escaping his Manchester United nightmare and returning to former club Borussia Dortmund.

“You could see that it was a huge relief for Shinji Kagawa [to have left Manchester United for Dortmund],” Kehl was quoted as saying by Sport Bild.

“It was not an easy situation for him at Manchester in the past few weeks. And then there were some comments from his coach that prompted him to return to Dortmund.

“He gets a lot of faith here. Everything that he’s been missing in the past few months, he’ll get back here again.”