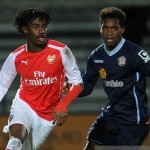 Reports are out claiming that Arsenal were bundled out of the FA Youth Cup by Crewe Alexandra yesterday.

It was a disappointing end to the young Gunners’ cup campaign after they had battled to come back twice against a hardworking and clinical Crewe side.

Liam O’Neill opened the scoring, sprinting clear of Arsenal’s defence to calmly finish into the bottom corner after just seven minutes, before Stefan O’Connor turned into his own net at the start of the second half.

Stephy Mavididi then pulled one back but Crewe restored their two-goal advantage 30 seconds later when Andre Brown tapped in at the near post to secure his side’s progression to the next round, despite Marc Bola’s late consolation. Suarez Deal Will Be Respectful And Amicable With Liverpool – Wenger