It has been reported that Arsenal fans quickly had protest placards confiscated during defeat to Manchester United. 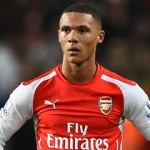 The London Evening Standard revealed that there were signs of a growing discontent in some sections of the Emirates Stadium crowd.

Manchester United substitute Darren Fletcher was involved in a heated exchange with fans behind the opposition bench following the opening goal, when objects were reportedly thrown at the visitors as they celebrated.

A few Arsenal fans, meanwhile, held up A4-sized placards calling for Wenger’s dismissal, which were quickly confiscated by club stewards.