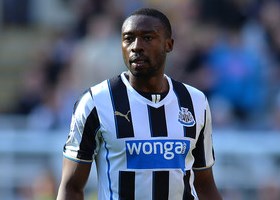 The 32-year old has been back in Alan Pardew’s plans recently, having been handed two Premier League starts this month, and scoring his first top flight goal since December 2012 in the weekend’s 2-1 loss to Swansea City.

Ameobi has played five times for Nigeria following his 2012 debut and is looking to play regularly in the final weeks of the domestic English season to get back on the international scene with Stephen Keshi’s squad for Brazil 2014.

He told the Northern Echo : “I just want to do everything I can for Newcastle, but from a World Cup point of view, then obviously the more I play, the better chance I have going,”.

“My focus is on playing for Newcastle because if I do that, then hopefully everything else will take care of itself.

“Make no mistake, I want to play games for this football club and help us do well. That is my priority.

“The World Cup is the World Cup and any player worth his salt would want to be there. But if I’m not playing for Newcastle then there’s a very good chance that I won’t be in the Nigeria squad either.” Xabi Alonso Wants Spain To Bounce Back Against Chile