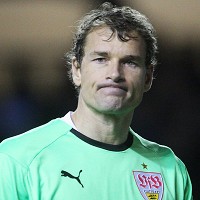 The Gunners are now left with only one senior goalkeeper in Manuel Almunia who played in the FA Cup sixth round match against Manchester United and 19-year-old untested goalkeeper James Shea.

However all is not lost for Arsenal as former goalkeeper Jens Lehmann is being lined up for a sensational return to the London club.

The 41 year old ex-Germany international is believed to be wanted by Arsene Wenger as an emergency signing.

Lehmann last played his competitive football for German side VfB Stuttgart and retired from the game on the 30th of June 2010.

But the question now is Jens Lehmann the answer to Arsenal’s goalkeeping crisis? We all know that this will only be a temporary solution but can the former Gunner play at the standard required to be a Premier League goalkeeper considering the fact that he has been retired for almost 9 months.

Lehmann on his part has revealed that he will be more than happy to help out Arsenal. What do you think? Should Arsenal sign Jens Lehmann? Vote now and find out what others think. Cheers!