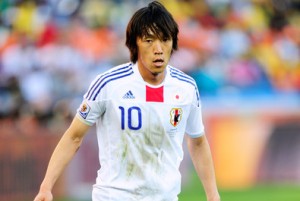 Japan international midfielder Shunsuke Nakamura has announced his retirement from international football after spending most of the World Cup on the bench.

Nakamura, now age 32, made 98 appearances for Japan after making his debut in 1998, and in the years following the 2006 World Cup, while he was starring for Scottish club Celtic, he was recognised as the team’s poster boy and creative hub.

When asked by Japanese reporters about his next match for the Blue Samurai, Nakamura said: “There won’t be one for me. I’m through.”

The midfielder then said : “It’s a shame I couldn’t do anything on the pitch, but I learned a lot. I have to accept the fact that I wasn’t good enough. But I don’t think my time has been wasted. This is life in soccer.”

Wayne Bridge Pulls Out Of The England World Cup Squad

Pepe Reina Over The Moon After Spain’s World Cup Triumph