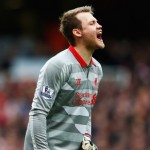 It has been reported that Liverpool keeper Simon Mignolet insists the players have not given up on securing a Champions League place next season.

“From us, the message is, ‘keep putting the pressure on for the remainder of the games, starting with Chelsea at the weekend’,” the Belgium international told Sky Sports News HQ.

“We will then see where it leaves us at the end of the season.

“It is very tight and a lot of teams are fighting for Champions League places.

“The Premier League has a lot of big teams who will fight and there is going to be huge competition for places in the top four.”

“The club has always been connected with the Champions League, so we still want that,” he added.

“It will depend on the results of other teams as well but we have to look at ourselves and make sure we do our jobs in the last three games of the season.

“We must make sure we keep up the pressure on the other teams and make sure they are looking over their shoulders to see what we are doing.”